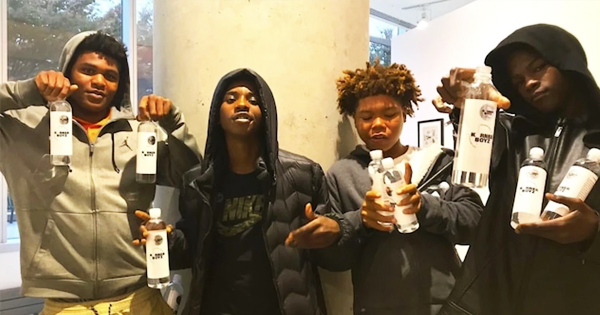 A group of five Black teen entrepreneurs from Baltimore, who started out cleaning windshields on their local corner, have launched their own bottled water company called Korner Boyz Water. They used their own creative skills, determination, and support from business connections they’ve made along the way.

Known locally as “the squeegee boys” — Taetae, Leroy, Khalil, Keyon, and Deauntae — used to flag down vehicles at the corner of Mount Royal and North Avenues in Baltimore to ask drivers if they could cleanr their front windshields in exchange for a few dollars to help them buy food.

There were times that some people would insult them and even yell racial slurs at them. But when they met Kai Crosby-Singleton, a community liaison for the Maryland Institute College of Art’s (MICA) Office of Strategic Initiatives, everything changed.

Crosby-Singleton invited the boys to the Baltimore Thinkathon, an annual initiative between MICA and the Baltimore Cultural Alliance where attendees are given the opportunity to brainstorm ideas with some of the city’s leading creatives. They were introduced to a number of entrepreneurs including Sheri Parks, the Vice President of MICA and co-founder of the Thinkathon.

After meeting with other local entrepreneurs, the boys decided to go into the bottled water business and the support thus far has been overwhelming. They’ve received support from many different people including a graphic designer who designed their logo to lawyers who helped them to draft their business agreement. Some have even donated money to help get their business venture off the ground.

Now, they are selling their bottled waters by the case. And while they are still cleaning windshields on the side, they hope to expand their new business by selling their cases to wholesale buyers. They even plan to add flavored and sparkling water to their line of products.

The beach might be the first thing that comes to mind when you think of summer, but when the sun goes down you can...
Read more
Fashion

Summer is fast approaching, when we can finally bask in the wonderful weather! It’s a perfect time to hang out with friends and family...
Read more
Beauty

As we all know, fashion moves fast, so trying to find the perfect swimwear can be difficult  at the best of times. Fortunately, while...
Read more
Beauty

SAMANTHA DAVIS We are so excited to have you as our May Cover Model for the third time! How does it feel to be...
Read more